Still a difficult week for Madoc, but we should be able to drop the beta patch tomorrow or maybe even later today. We mostly covered what will be in this patch last week, but to reiterate that's new procedural weapons and improvements to existing ones, the new in game user interface, outdoor arenas, a few gameplay improvements and bug fixes.

The new weapons belong to 3 key categories: falchions/messers, pole arms and hafted weapons. Pole arms will be expanded on and improved, but basically at this point we just have to keep adding components to cover most weapons that will be in the game. 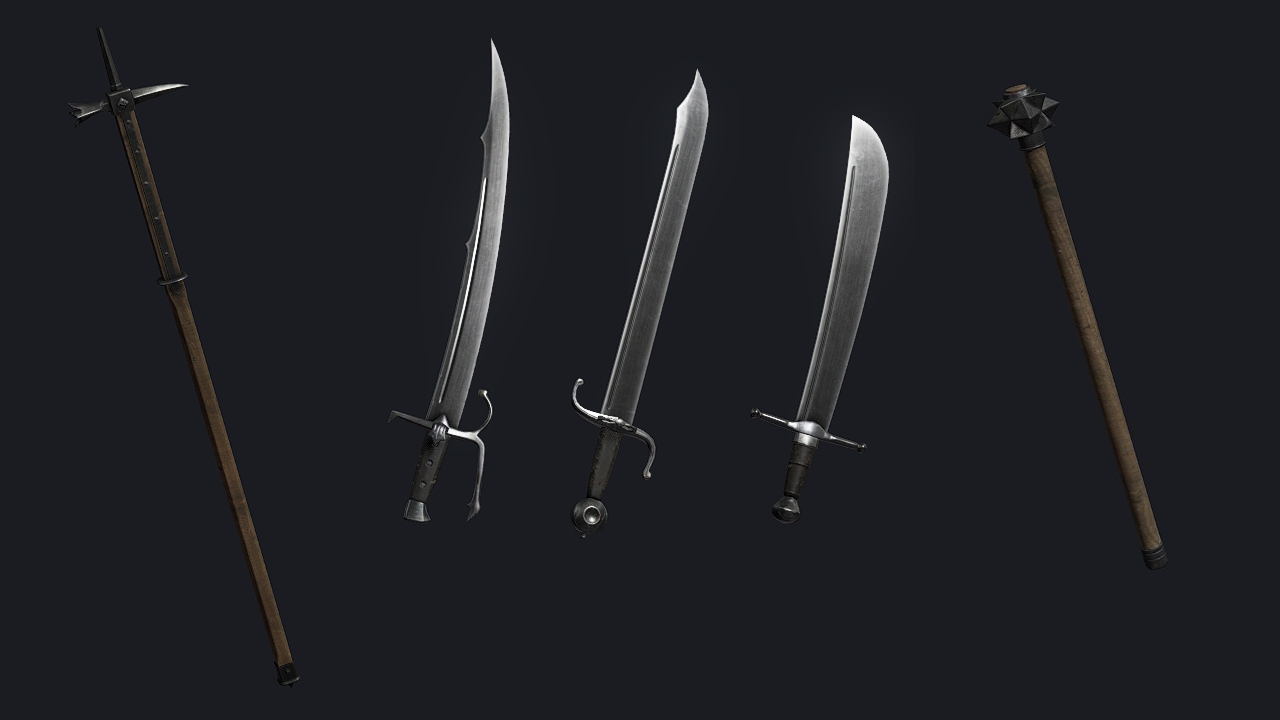 Right now we're working on the final new gameplay mechanics for weapons, in particular switching grips and flipping weapons. It took us a while to figure out how to best handle this. The same weapon could have 3 different grips, and potentially flip its striking direction. This could mean defining up to 6 sets of stats for each of thousands of components, messy, difficult to do right and then maintain. We considered dropping the current weapon mechanics entirely and going with something that is based purely on points of impact, and doesn't really care how a weapon is being used, but after exploring this idea thoroughly we decided it would be too unpredictable and require too much precision from a player control perspective.

In the end we decided to go with a sort of hybrid approach that is versatile, but also easier to work with. Each component is given a category that explains its role in a weapon configuration, and different grips for different configurations know implicitly how these components will affect its properties during different actions and interactions. There's a bit more complexity in the system, but we can just make adjustments to the system and not worry too much about how our thousands of individual components are defined. Huge advantage, It's really easy to get started and add new configuration as we go, without changing data formats for weapons etc. We can start adding new grips for weapons right away.

There's a few more things in the works that we can talk about soon, but we're nearly done with mechanics and systems that we need for this update, and we've got some other some nice arena content waiting to get included.

Member
while reading, I experienced a pleasant range of emotions
M

Member
Not sure if this is the right place to put this but I thought it might be seen.
I've just updated the beta game and wanted to test it out. I started out in arena and I saw the new inventory/skills menu.
Played a duel, ran smooth no problems. I then went to start a new campaign run and passed the character creation segment. I reached the part where you choose what magic you want to learn first and I was able to click select one of them but no next button appeared there was no text anywhere else and it was just the circles. I felt my way around the dark to where the NEXT button used to be. Spawned in everything was fine, went down the hall, opened my inventory, totally normal, opened a chest took what was inside and then when I killed the first zombie and tried to loot him the game went entirely black. All I could see was the cursor and pressing ESC led to the cursor changing and the game remaining black. Tried to start a game twice in both fullscreen and windowed mode, same results.

Thaumaturgy menu from character creation EDIT: After a small update I am not experiencing these issues anymore

Member
Thank you for the update. Would you be able to elaborate on when Sui Generis will be underway for us keen gameplayers. It would be nice to have a storymode with a ton of stuff to do. This game looks like it could be the next "upgraded isometric" Ultima. I hope the storyline to Sui Generis is just as interesting as the Ultima Series.

Even though the game updates are slow, I am very grateful that you have not abandoned this project.