This week we've been mostly trying to complete the new GUI system, but also getting content ready for the arena update proper.

One of the most significant changes we wanted to make was to the skills UI, it was quite ugly and confusing, and certainly didn't fit the new direction for the interface. The new interface is a much more graphical full screen UI, it's a lot nicer to look at and easier to navigate, it provides more useful information and feedback and has some nice animations. We still want to add some background images for each skill, but other than that it's complete and functional. 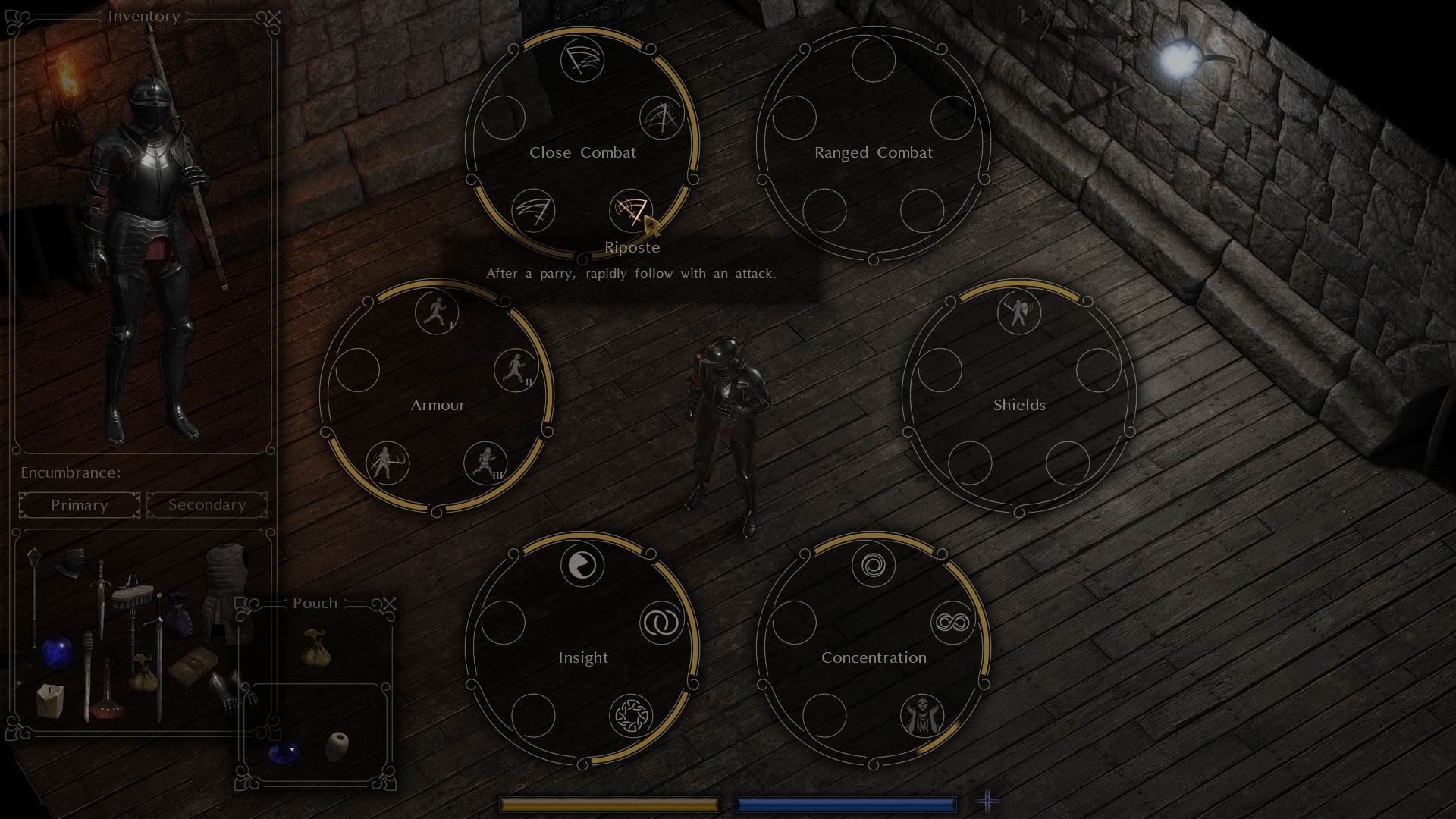 We've now switched the entire core GUI system to a new one that uses skins and a new rendering system. This is much more versatile and powerful, and we're also considering features like allowing players to choose from different designs and make their own colour schemes. There is also an important technical aspect to this overhaul. In creating the new rendering engine one goal was to switch to a more modern graphics API usage and complete abstraction from it, but to really complete this change we also had to revamp our GUI, which again is rendered on the GPU. We didn't think we'd do this for a while, but this new GUI system does it. This will allow us to strip out a huge chunk of legacy functionality, improving compatibility and performance with many GPU drivers.

On the procedural weapon front, we've completed a bunch more core assets that will allow us to make a wide range of new weapons, but also expanded a bit on how modular these can be. We can use more components, set up more rules for how different components interact, which deformations should be applied and so on. These kind of things allow us to effectively multiply how many variations can be generated, and generally support more designs, greatly increasing variety in weapons.

We're looking to get the new UI and a fresh batch of procedural weapons as well as various other small but still important improvements we've made over the past month into the beta branch ASAP, possibly within the next few days.

Have a great week!
-the BM team
C

Member
Wow, that new Skill-Tree looks a-lot more interesting then I thought it'd be (And yet it's so simple), I mean it looks like a bunch of Six-Shooters Made Into One Big Colossus... cool.

Member
What Ranged weapons are you considering adding?

Member
Although I think the new skills UI looks fantastic, I'm a little disappointed that the skills that are a direct upgrade from one to another (for example maneuvering in armor and continuity) do not overwrite each subsequent lesser skill. I was hoping for this to be put into place as to save us slots on each skill tree so we don't reach the trees limit before we are able to get all the skills we'd want for our characters.
You must log in or register to reply here.
Share:
Twitter Reddit Pinterest Tumblr WhatsApp Email Link
Menu
Log in
Register
Top