The procedural weapon system is finally complete, at least as far as generating weapons goes. We'll need to do some integration with gameplay system, but the important thing is that we can now build an ever increasing library of weapons and development can move on to completing other features.

We're still developing the assets and there's some small but important changes and additions we need to make that will improve the quality and variety, but we're going to show you a few examples of generated war hammers. We've been getting our head around the system and focusing on the basics here, but more elaborate designs are in the works, though mostly for other constructions (i.e. horseman's hammer) and weapon types.

These hammers are generated using only four variants of each component. The possible combinations are already in the thousands. We still need to add three more components: grips, guards (these are optional) and separate bolts; decorative elements or spikes for the side of the head.

As we continue to add components, the results grow exponentially. 10 variants gives us over 100 million combinations. But combinations are only part of it! Individual components have up to three deformations each, procedural materials always look different, quality levels, wear and dirt are also procedural and always look different. Even the same exact weapon (i.e. for intentional mass production) looks quite unique and not a clone. 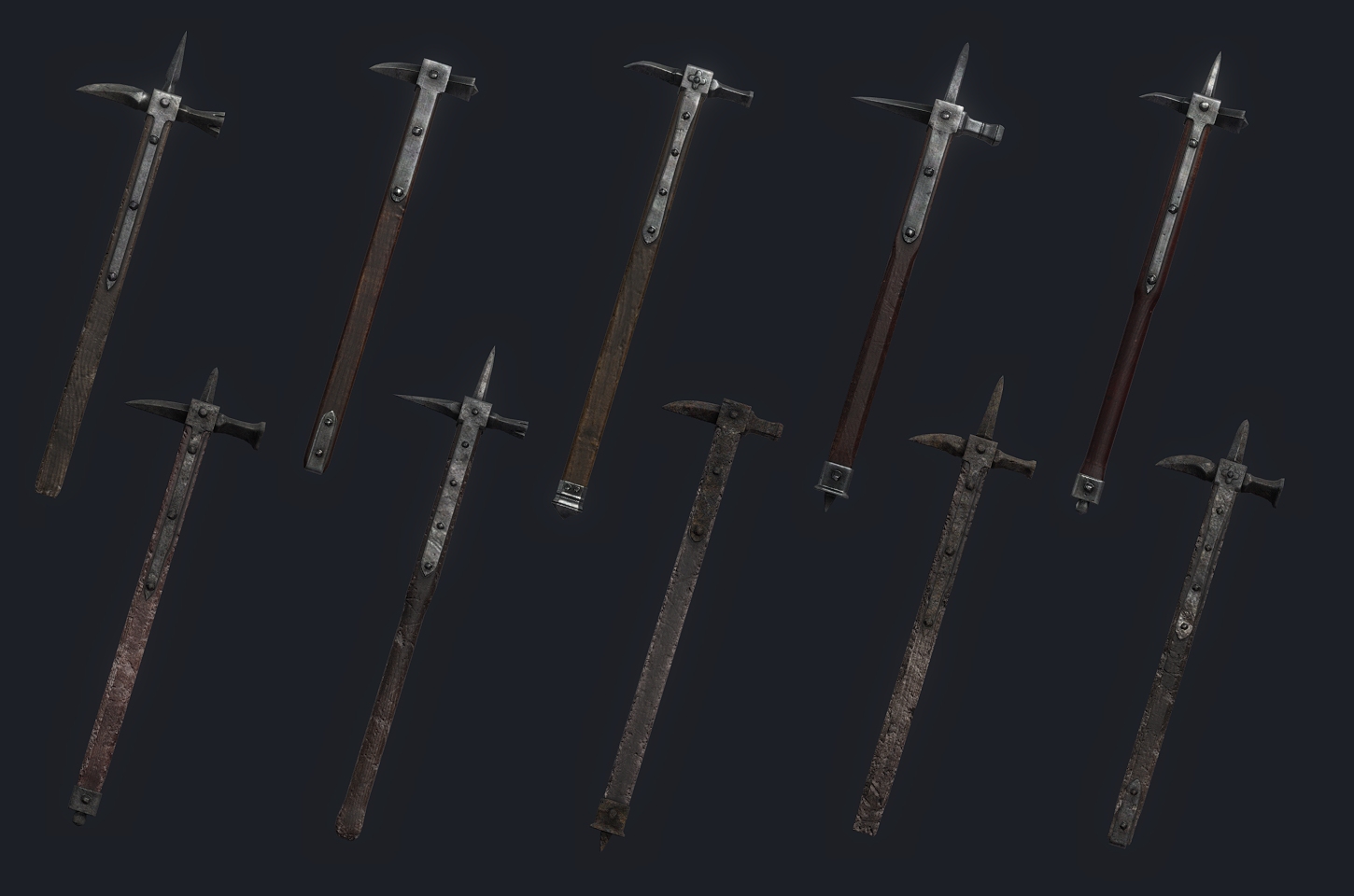 Here is an example of the same hammer using different quality modifiers on the steel. In practice medieval steel was full of impurities, resulting in dark spots and streaks, which could also compromise its strength. 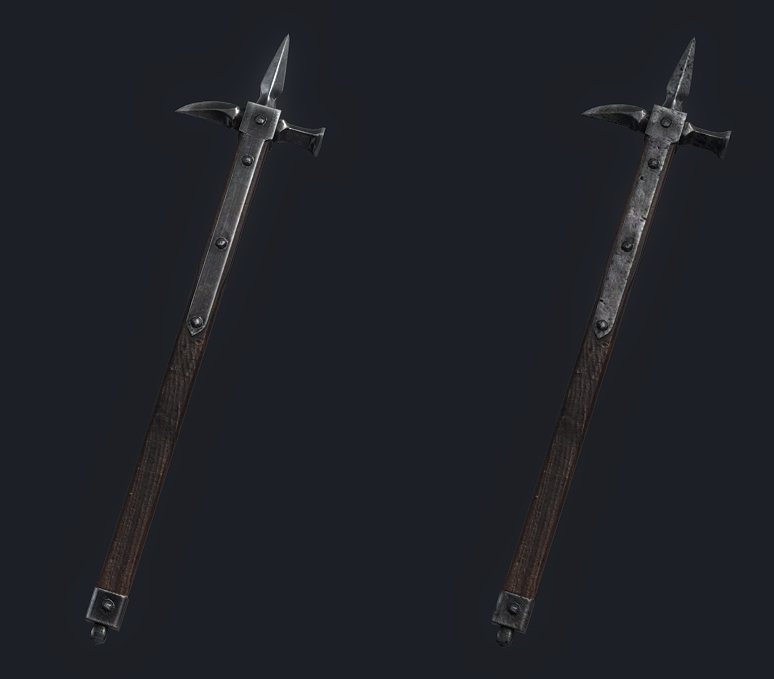 Here is an example of the same hammer with different deformations applied: 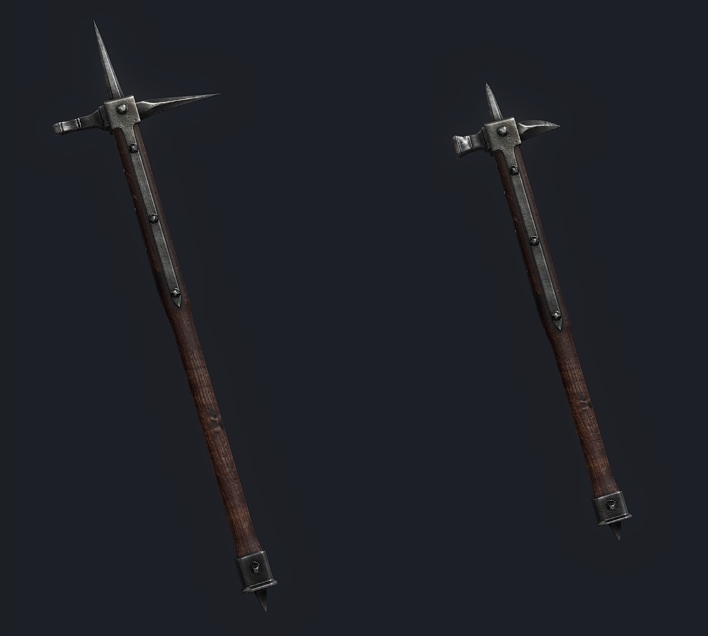 Finally, an idea from community member / tester Zhuliks, a comparison between a historical example from the Wallace Collection and one of our generated hammers. It's not supposed be an exact replica, but it shows our efforts to create authentic looking details and materials. 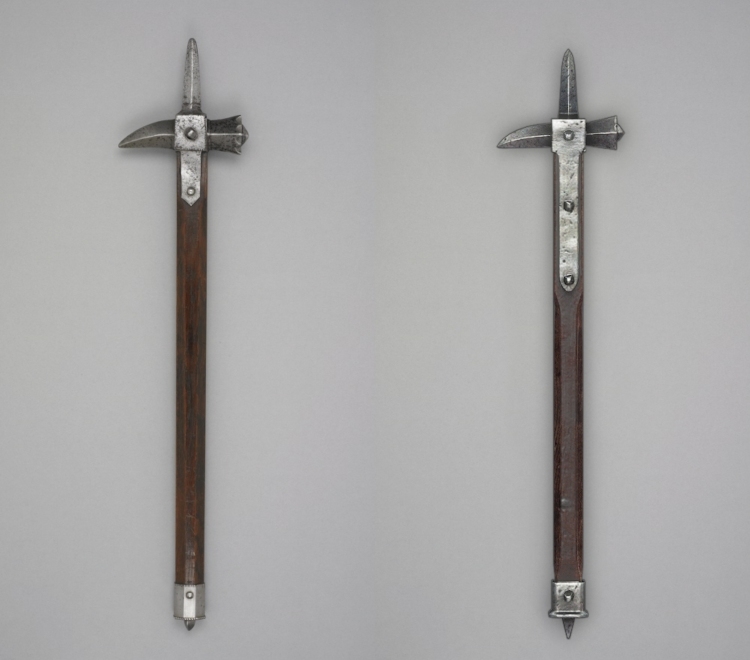 We've been saying for some time that we weren't really adding weapons to the game, because we wanted a better, procedural, way of doing it. This is it and it's now full steam ahead, many new weapons will be added. Besides the obvious randomisation and gameplay mechanic advantages of this, it is also a much more streamlined asset creation process. Another advantage is that as all weapons are effectively generated in real time, any update we make to the system or the graphics will instantly update every weapon, with zero per item maintenance.

It's very easy for us to add components, and we will continue to do so more or less indefinitely. Many of the components we create can be used across multiple weapons with similar constructions. We can also define custom rules inside the "weapon factory" to bypass common weapon layouts and create more unique elements and designs, while still leveraging most of the randomisation features and components. Factories can be used to generate randomised weapons, but also to very quickly design specific weapons. These factories are also not limited to weapons, and we already have a few ideas for other objects to generate procedurally.

We will talk more about weapons later as there are also some nice gameplay mechanic updates. For now we will be trying to wrap up some functionality for the GI system so that we can give our testers a version of the game running on the new renderer, and then moving on to completing gameplay features for the updated arena. In parallel we are also finally making some real progress on our role structures, which will finally allow us to leverage all the work we've done on AI and the role system and provide more compelling and intelligent NPC interaction.

Have a great week!
-the BM team
S

Member
So sick. I've always wanted to see procedural weapon generation in games. This system seems to fit perfectly in line with Exanima/Sui Generis's vision as a medieval/post-apocalyptic open world.

Thank you for the comprehensive post and screenshots!
O

Member
Have you played with the idea of scabbards and weapon holders on belts? I think it would look really cool on the models
F

Member
Imagine whacking a zombie with the sharp end