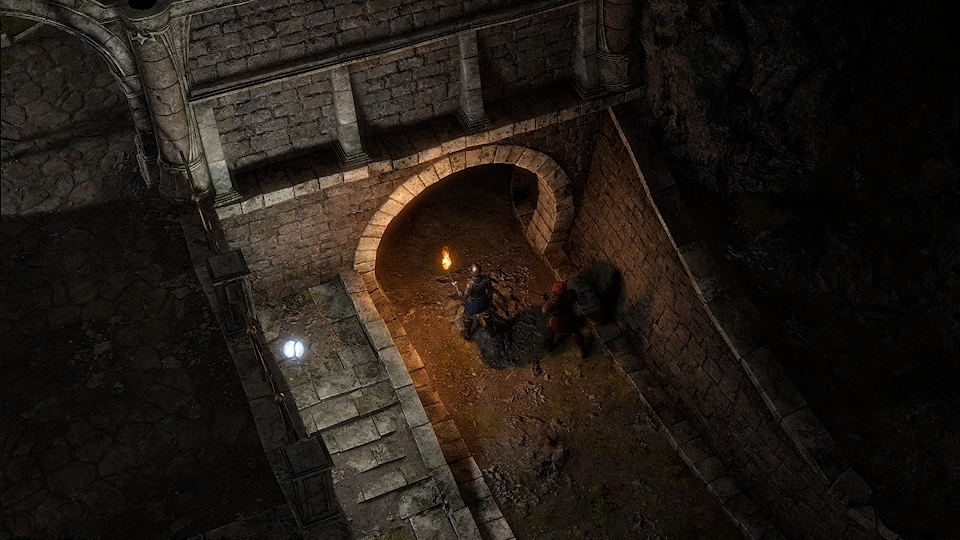 The crossroads has received some changes, and while you're there look out for dark tunnels...

A large new area features an all new environment, new creature types, new items and takes advantage of various new level building and engine features. We won't spoil anything, but we hope you enjoy the atmosphere and different pace of gameplay we've introduced here. This also reveals important aspects of the game world.

This level represents the final core set of assets required to complete the game, built using new tools and overcoming various development challenges. This is the first of multiple of its kind, which will begin to play an important role. In coming updates we'll be adding more features, mechanics and creatures to the body of content we're introducing here.

In the last update we introduced a very basic version of our dialogue system. Since then we've been expanding its functionality to support future content. We want to create a dialogue system that integrates seamlessly with the rest of the game and feels dynamic, rather than being a separate mode. The idea is that you can talk while doing anything else, discuss what is happening as it happens, point to things and say something about them, or ask someone to interact with them, converse with multiple people at once, join or leave conversations that are already under way, use contextually appropriate dialogue, even in combat, and generally treat dialogue as a functional and natural part of interaction, just like in real life.

Some of this doesn't have a role in Exanima yet, but the core functionality is now all there. We will soon be introducing more NPCs, and new mechanics that will take full advantage of the system. In this update we have added new dialogue with Derrin, using new scripting, role functionality and AI system interactions. There's a lot of moving parts to making the dialogue feel spontaneous and dynamic, so we'll be keeping an eye on this and refining the mechanics for more dialogue to come. Note that you may not experience all dialogue on every playthrough, as the conditions can be complex.

Our dialogue authoring tools have also received big upgrades, allowing us to more easily create and modify large complex dialogue structures and automate common scripting tasks, which can all be quite difficult and daunting!

Those that have followed us more closely may know that our priority is to create a believable and immersive game world. Everything we do, from physics to itemisation is with that goal in mind.

In this update we introduce a huge number of "mundane" items. These are items that do not often have a practical use for the player, but help create the setting and tell a story. We design our environments to have practical purpose and reason, accurately recreating real world locations, devices and processes. Now we've built a system for randomly introducing a vast number of items in appropriate contexts, whatever those might be in a detailed game world.

We've now reached over a thousand items in the game. The new items make the many containers in the game much more interesting to rummage in, rather than being simply empty or holding a single item you've seen many times before. There are many new improvised weapons among these (including some that may not seem to be weapons until you try to use them as such). In future we will also be introducing new practical applications for more items. 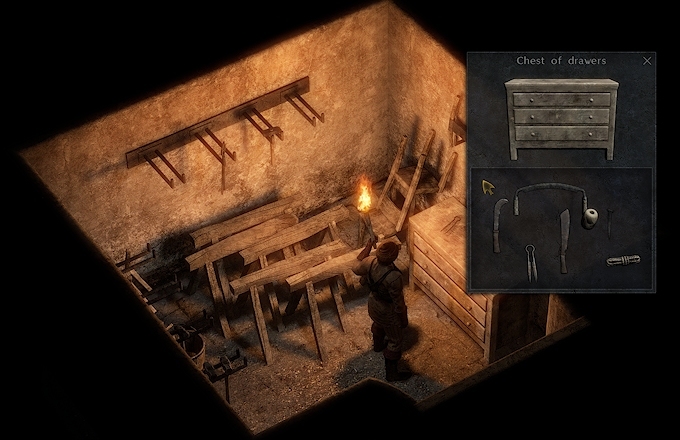 We've always been opposed to an overlay navigation system that would cause you to focus your attention on a UI rather than the game world itself, but what's an RPG without maps? In this update we introduce maps as objects that you can find in the environment, and consult as you would in the real world.

Using our constantly improving texture tools, we've developed a system to procedurally create appealing maps with a hand drawn style. This allows us to easily produce and update maps for locations in the game, and make each one of them look unique in every detail. 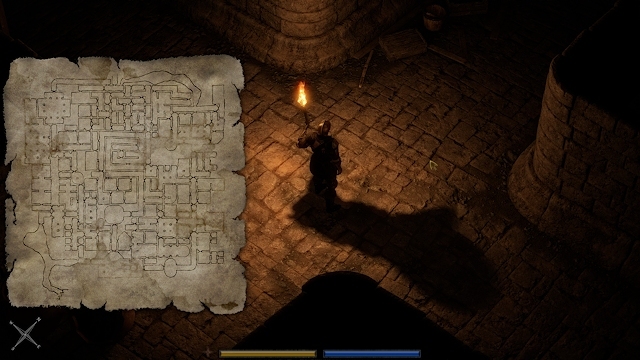 We are trying to avoid investing even more time into it, but Exanima's character physics system is a huge beast in need of constant upgrades and maintenance. In this update we introduce new creatures whose proportions and movements proved very problematic. We've had to make extensive changes to some core aspects of character motion, resulting in some great general improvements to how characters move. We didn't quite stop there either.

Characters are much better at controlling their virtual muscles, resulting in smoother, faster and more precise movement. This corrects a lot of wobbly and floppy looking motion. We've also made legs move more precisely and perform less jittery corrective movements. Characters pause less between steps and turns, resulting in more fluid and responsive movement in combat. Head movement was also improved, becoming much more stable and tracking more accurately. The dynamic balancer and various other things have also been improved.

You can see a quick video of the improved animation in action here. A greatsword is used, which due to its size was particularly prone to wobbly movements in earlier versions:

Exanima has a unique aesthetic that is built on our own graphics engine and produced using our own content creation tools. We are constantly improving our engine and tools, and updating the game's graphics to reflect the current state of them, as well as increasing standards of quality. In this update we have various new rendering features and improvements, and we've built new graphics and updated assets using some new tools and upgraded versions of existing tools.

This update is only a part of what we've been working on. There are multiple levels already in the works, thaumaturgy is nearly ready to be added, more creatures are coming and various other features are at various stages of completion. We've done a lot of "housekeeping" over the past months, still upgrading engine systems and tools, but we hope to focus on more gameplay relevant features and content from now on.

The next major update will feature thaumaturgy and more story content. This will likely be followed by a smaller arena focused update that also introduces procedural weapons. The remaining updates will focus adding the last story content, more in depth NPC interaction and various less critical gameplay features.

Member
Awesome! Thanks for the update, cant wait to try it.

Member
Thank you Bare Mettle, thank you for your announcement.

I hope you are having a great time making this game.
I am proud to play it alongside your updates and development.

Insider
I can't believe I'm back here again after all this time! I just had to say this update is blowing my mind. I have been following this game since age 12, and I'm about to complete a game development 3d modeling program now - it's like the game has grown up with me. I have been saying to people for seven years that Exanima/SG is my favourite game ever, even though it's still in development - in fact, it was partly because it was being developed that it had so much significance throughout.

The character movement in combat is drastically improved. I had no idea how much was missing just from head movement alone, it all looks flawless now. I'm eager to see this make it back into the public eye in a major way
You must log in or register to reply here.
Share:
Twitter Reddit Pinterest Tumblr WhatsApp Email Link
Menu
Log in
Register
Top