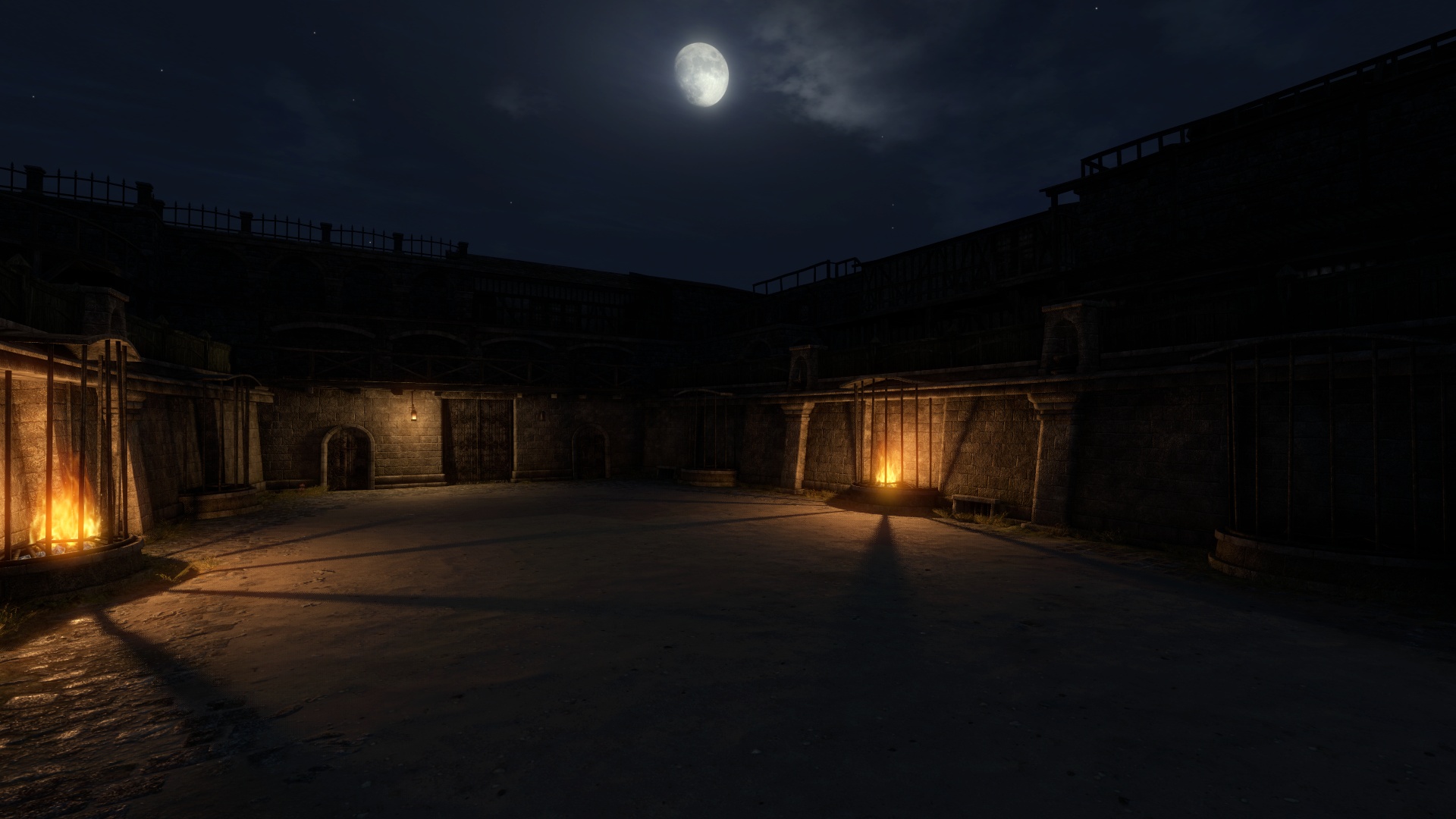 In the past months we've been trying to break free of the endless cycle of improving core features and instead focus on adding what's needed to finish the game. This includes quite a few things, but the really crucial ones are terrain, dialogue and thaumaturgy. Those are what we need to continue and complete the story.

Adding terrain was a late decision. We had an incomplete terrain system, and we thought to get it to a state where we could use it for some outdoor arenas. Since then everything's been hugely improved and optimised to support larger and more complex maps, many more dynamic lights and objects, more detailed and realistic graphics and physics, and many other features and improvements.

Our terrain wasn't just incomplete, it was fundamentally outdated, it could never support all the things we've come to rely on. We could have maybe worked around these limitations, but it would have been a waste of time. We had to completely redesign and redevelop it.

Knowing we had to go back to the drawing board, making an improved and complete terrain system that could also support all these advances, we thought we should take it a step further. Rather than build our engine around two types of environments, we could try to adapt everything to work in the same way, make a unified system that could seamlessly integrate terrain and modular environments.

It would take a lot of work, not only to develop the terrain system, but also to abandon the comfortable constrains of highly segmented and flat environments. The payoff was clearly huge though, it opened up many exciting possibilities for future level design and visual variety.

After much head scratching, prototyping, developing and refining we finally succeeded. We have a fully functional integrated terrain system with all the bells and whistles. We have our first outdoor arenas, we're preparing to release new story content with it and we will also be adding it to existing content. 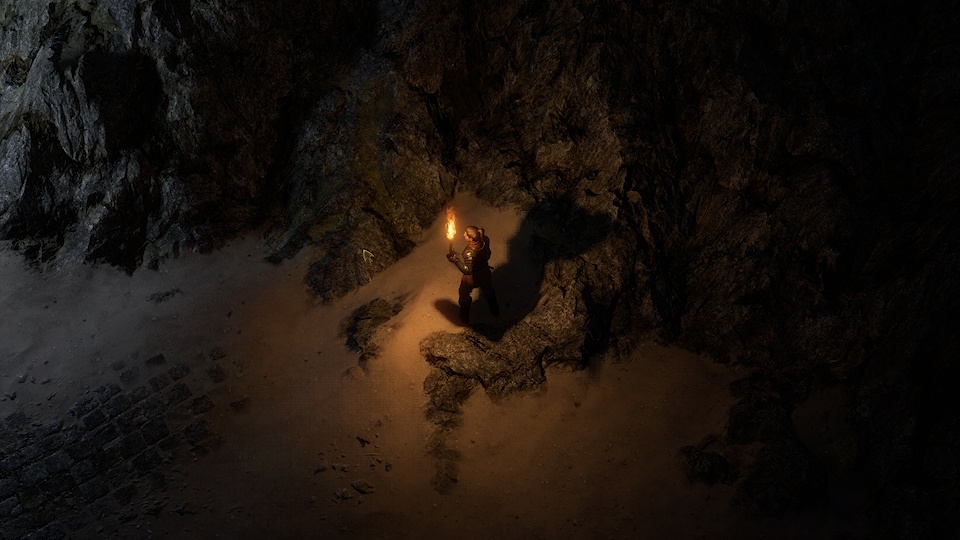 Version 0.6.5.2 features the new terrain system in the form of arena matches that take place outdoors, with variable time of day and weather conditions. Many new items have been added, some important new features and a host of critical or required changes.

There's more content and additions that are very nearly ready, but this much has made it through testing and seems stable enough for you to get your hands on it. We'll be releasing some more updates shortly.

While we've tried to avoid spending time on improving things, a few improvements snuck their way in as we worked. There's some notable upgrades to combat physics and animation, and in adapting things to bright sunlit settings we've made some nice enhancements to lighting.

Insider
WOOOOO! full steam ahead on the hype train!

The lighting looks really good and the new items are looking better than ever!
Last edited: Jan 28, 2017

Insider
Damn. You guys have been busy. Definitely going to check this out later.
All the hard work is appreciated Bare Mettle! Slowly, but surely

Member
My frames improved from 20 to 60 on full settings. thank you so much

Insider
Need to see the steam forums to check how badly they're freaking out.

And also to watch the unbelievers be chastised.

Insider
A continued stream of nice and steady improvements and additions to an already fun game. There's still a lot of fun to be had with what we have, but really looking forward to future additions like Thaumaturgy and dialogue

Fawz said:
A continued stream of nice and steady improvements and additions to an already fun game. There's still a lot of fun to be had with what we have, but really looking forward to future additions like Thaumaturgy and dialogue
Click to expand...

Member
I love the new update!! there is one problem though. when I try to enter the new outodoor arenas, all I see are textures flying across my screen. is it broken or is it just me? help.

Member
Hey, guys! I just started a YouTube channel last night, and I chose to focus on none other than Exanima gameplay for my first string of videos! Check me out at "Shalen Smith" on YouTube or search "Exanima Longsword Arena" there or on Google to find some of my videos! Any views, likes, shares, or subs would be greatly appreciated! For Exanima, Sui Generis, and Bare Mettle!
G

Member
The new arena maps don't render correctly for me. I get a black abyss with a few clumps of grass sprinkled around. What's worse is that if I hit escape to forfeit the game crashes.
D

Member
Can we have the characters make an actual fist when unarmed now?

Insider
For those reporting a black screen during the outdoor arenas it's likely due to using Intel HD 3000 or 4000 graphics. Madoc is aware of the issue and is looking into a solution.

Member
What an absolute surprise! I had come back to Exanima after a long break about two weeks ago, just to be greeted with a new update. Perfect timing!
Q

Member
Sorry for my haste, but I heard that devs were saying next upcoming patch will be concentrate on campaign, and it'll come very soon after this patch. When?

Very excited for what's to come.

The improvements to pugilism have shown me for the imposter I was! Need to be a better aim and the AI are more competent now.

I am finding that the Cursor Look (spacebar) is now a bit erratic and doesn't just swing the camera around to face the cursor a lot of the time. It appears it moves the cursor as the screen moves and then follows it? Edit: also causing problems with Orbit camera. FYI I'm on linux running Steam through wine.
Edit 2: found out it's an issue with dual screens. When I move the screen to the second Monitor it goes wonky, but while on primary monitor it's fine. May be local issue...

Member
Looks like a bunch of cool new features to test... Unfortunately, not for me, as a GoG user. The most recent version I am able to download through GOG is 6.4.3. That was released 5 months ago!
Is there a way for GoG users to gain access to the account page, so we can download the latest release also?
A

Member
New animation and lighting look great, love the rain! and time of day effects. I've only encountered one version of an outdoor arena so far are there more?

One small piece of constructive criticism - the outdoor arena feels like the footsteps should have a crunchy 'sand' sound to them to be more immersive - it may be that the dead acoustics of outdoors makes the current footsteps sound slightly out of place. (aware that this is tiny nitpicking)

Last Brat said:
Looks like a bunch of cool new features to test... Unfortunately, not for me, as a GoG user. The most recent version I am able to download through GOG is 6.4.3. That was released 5 months ago!
Is there a way for GoG users to gain access to the account page, so we can download the latest release also?
Click to expand...