Member
I know this game is supposed to be dark and moody and all, but I'd like to play a character who doesn't suffer from permanent night blindness. While the game does look nice, the light stops spreading much too quickly, so what realistically should be a little shady is closer to pitch black. Humans can see decently well in dark conditions, and a figure in full plate armour shouldn't be reduced to a few shiny spots the moment the light level sinks just a little bit.

This also hurts gameplay, since oftentimes you don't see what you're doing (especially if you don't have your computer set up in a bright room). This goes especially for the arena mode, since I don't think you're supposed to fight in darkness.

Basically, it's a case where art style takes precedence over both playability and realism, and I don't think that's the right path to take for this game.

Member
I think its alright, just avoid fighting in the dark or use your torch.
But as many people said, i would like to have my character a bit outside in the sun heh.

Member
That's about as helpful as, "if you don't like the game, don't play it," when someone comes with suggestions for improvements.

If I really need to, I can crank up the brightness on my monitor, but that washes out the colours, since for higher brightness levels you need higher contrast to balance it out, and contrast is already at max. It also makes hard to look at any other programs that are at light levels other than perpetual dusk.

Member
No, it means that I think its alright, just avoid fighting in the dark or use your torch.

Member
Well if you want realism:

We have no idea what the lanterns are, so the amount of light they emit is up to the devs. The torch is pretty true-to-life, torches don't emit a whole ton of light. This is underground, so pitch black is expected.

Besides all that, the darkness in Lv1-2 is a big part of the gameplay. You start as a nekkid guy (optionally), scared and hunted by these spooky monsters in the dark. You feel helpless and naked, literally and figuratively. The dark amplifies these fears instilled in the player, as well as acting as an interesting gameplay mechanic, dealing with the enemies in the dark.

As you progress through the first three levels, darkness becomes less of an issue; a literal gradient of dark to light as well as a figurative gradient from being a weakling to the alpha.

We have no idea what the lanterns are, so the amount of light they emit is up to the devs. The torch is pretty true-to-life, torches don't emit a whole ton of light. This is underground, so pitch black is expected.

Besides all that, the darkness in Lv1-2 is a big part of the gameplay. You start as a nekkid guy (optionally), scared and hunted by these spooky monsters in the dark. You feel helpless and naked, literally and figuratively. The dark amplifies these fears instilled in the player, as well as acting as an interesting gameplay mechanic, dealing with the enemies in the dark.

As you progress through the first three levels, darkness becomes less of an issue; a literal gradient of dark to light as well as a figurative gradient from being a weakling to the alpha.
Click to expand...

And we are lucky that the torch doesn't die. Imagine that you need to find more resources to keep your torchlight.
People is really ungrateful...

Member
In the story it's great, it gives a very foreboding feel. In the arena it's just plain annoying, there is no reason for it to be dark, in fact it should be super well lit so spectators can see even if it's underground. There is no added mood or effect in arena, it is all about fighting. AI doesn't get affected by the dark, they always see fine and don't have to avoid it. For arena ether make the AI react to dark areas or just get rid of them. If you want to add areas that are hard to fight in add water, raised areas, bridges, choke points,stairs or any thing you can think of.

Member
I don't know what it is about my own personal setup on my PC, but no arena areas are too dark for me. The dungeon is pitchblack in places, but that's intentional, right?

Member
Yeah its intentional, it's supposed to be like a hazard but it doesn't make sense if AI (humans at least) are not affected by it

Member
I think the darkness isn't inaccurate. I once went caving and even though everyone had headlamps on I remember thinking that it seemed sooooooo much darker than anything I'd ever experienced. Where if something wasn't in the direct path of the light then it completely disappeared. It's very different than the darkness of night and even in doors at night has nothing on underground.

I do dislike trying to fight in the dark as it's basically impossible but that does add a strategic component to the whole thing. if you're going to use a 2 handed weapon or 1h and shield then you have to pick a well lit room to do it. If you can handle yourself with a sword in one hand and a torch in the other then you have more options. It forces you to make strategic choices and I like that.

Also I think it's appropriate especially for a game like Sui Generis is going to be where the world itself is the challenge and not just an endless supply of monsters. trying to explore in the dark, find treasure, or keys or even just your way can be as much a challenge and a reward as combat can be and certainly something to consider before venturing into the depths.

One thing I could see adding though, is maybe a very small corona of quasi visibility around your character. In real life if we're in the complete dark we could still use our hands to feel around and to some degree at least know what's around us and where we ourselves are. In game we really only have one sense, vision. taking it away completely with no recourse (in the event we lose or haven't picked up a torch) could get us into a sticky spot pretty easy.

konggary said:
We have no idea what the lanterns are, so the amount of light they emit is up to the devs. The torch is pretty true-to-life, torches don't emit a whole ton of light. This is underground, so pitch black is expected.
Click to expand...

Well, if you count the amount of life, it's probably somewhat accurate. However, it doesn't account for a person in such light condition adapting to the low light. It also doesn't really account for diffused light. It's overall a big problem with creating light in games (and one of the biggest causes of the brownness of many "realistic" games).

For an open area, a torch is about accurate. For an enclosed space, the light it gives off is far greater than you'd imagine, especially if you take night vision into account. It takes longer for an area to go pitch black. Even a very small amount of light can be enough to see at least something if you're used to the darkness.

Another detail that adds to it is just that — details. The view is rather zoomed out, so the characters aren't very large. This means you lose out even more if it's dark. Sometimes even something as large as a weapon can be almost invisible if it's lying on the floor, while a person actually being there would easily be able to see it.

But as mentioned, I don't mind it that much in the story, even if I find it unrealistic, but for the arena it's just gloomy for no reason.

Member
How hard can it be to move where there is light (in the arena)???
I simply cant believe this, there is a black hole and you literally go there to fight and complain that is all dark. What the actual f?

The only thing that i agree with this thread and is not from op mouth is that human ai shouldnt be able to do things in complete dark. Even blocking in there seems irrational... you should be able to throw blind attacks and guide with the sounds but no blocking. Unless you are one of those martial artists that can fight with closed eyes heh.
Last edited: Sep 17, 2016
M

Member
I've been tinkering with the game files in hope of increasing the brightness in the arena. Since I'm doing it on a per level basis - as opposed to replacing the broken light asset with the gas light asset (which has the side effect of changing the lighting in the levels) - I've so far only changed the novice arena:

I personally consider it an improvement purely in visibility terms. A problem I've found though is that adding too many light orbs can make the arena incredibly bright, hence why I've given it a mix of orbs and gas lights.

I would like to share this with everyone here since it's simply a case of replacing the resource.rpk with my edited one. If I can get permission from a mod or dev I'll come back with a download if anyone's interested.

Member
Well, the darkness in this game does make sense as there aren't any sources of ambient light anywhere. Also @MrSharkus I think I have a picture somewhere, where I broke the lighting in level 1 by duping too many torches in one area. I duped something like 50 torches.

Member
The eight toches are already enough to make the light annoying. 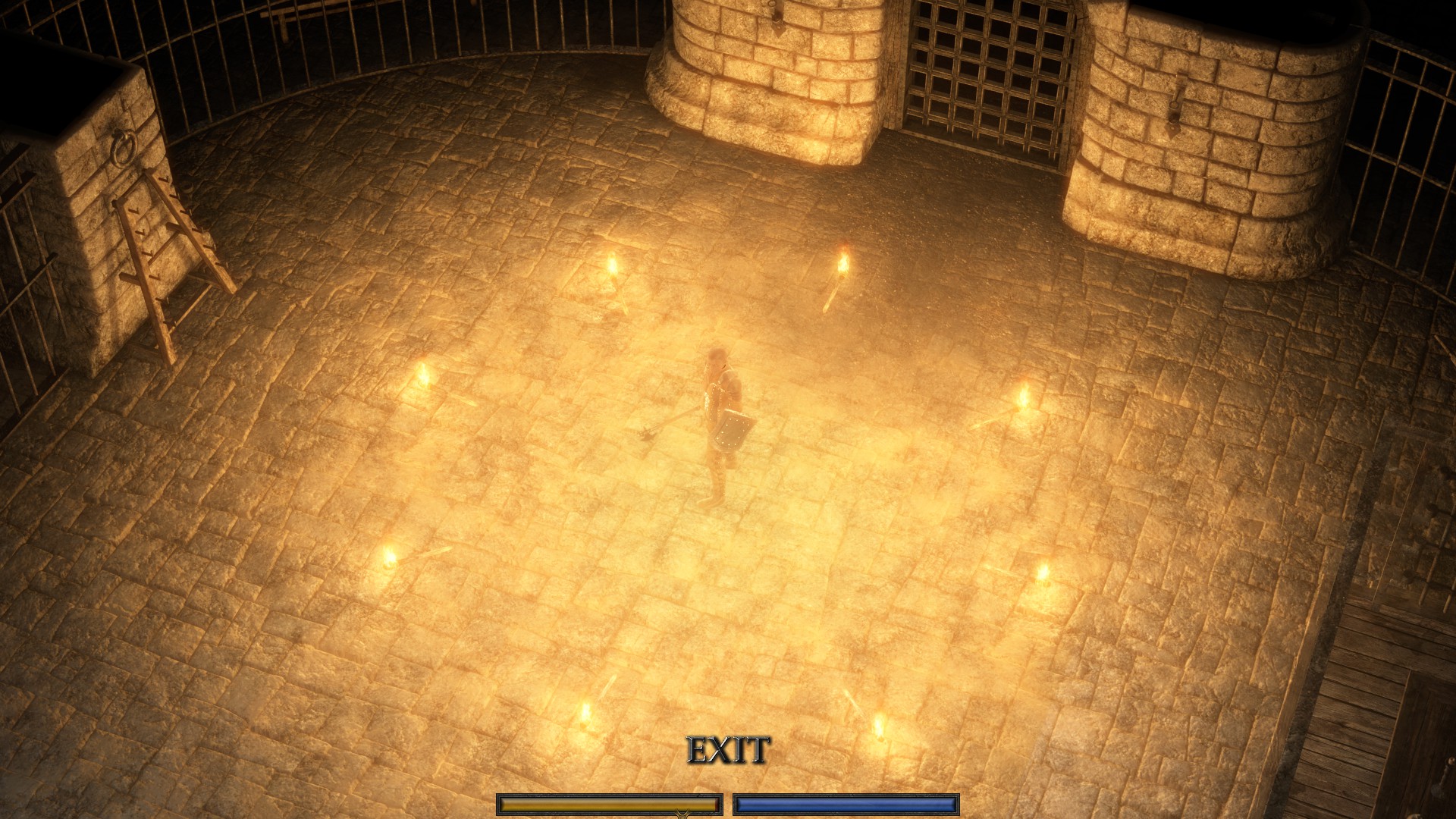 Member
I've uploaded the first version of my mod here. It adds lights to all the arenas apart from the tavern arena (this will be addressed at some point).
You must log in or register to reply here.
Share:
Twitter Reddit Pinterest Tumblr WhatsApp Email Link
Menu
Log in
Register
Top